Google releases the newer Android version every year. The newest update of Android comes up with a lot of new features, improvements and with security patches. But, how many percentages of devices are able to get that update. There are so fewer devices which are getting the latest update. Many flagship devices also fail to receive time-to-time updates. How can you expect to get the latest update on your mid-range device as it releases? How Project Treble in Android OS going to affect on upcoming smartphones?

Is Google playing with us?

No, it’s not only about Google. Nearly 90 percent of devices come up with preloaded applications, bloatware, UI modifications. They didn’t come up with pure stock android. Device manufacturer needs to work for every separate device to release the latest update of Android. It is not possible for OEM to work on it as every year they release dozens of devices. First, they have to think about Flagship devices, then it comes to mid-range devices and so on. This makes the whole process lengthy and time-consuming. That’s the major reason why our smartphone didn’t get the latest update as it releases.

From past two years, Google is trying to release its latest Android updates on maximum devices. Reports from last two years show that it’s not actually happening. Google has no control over smartphone manufacturer. Google can’t force them to release the latest update. That’s why the graph of Adoption of Google’s newest operating system is less than 10%. Its a big concern for Google. To fix that big issue Google changed some Android framework which is called as Project Treble. So, what is actually Project Treble in Android OS? Let’s find out. 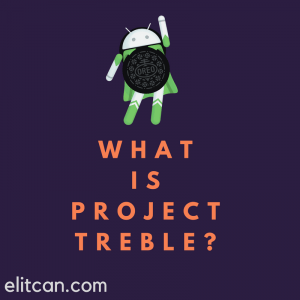 What is Project Treble?

Project Treble in Android OS is an attempt by Google to fix clog that slows down the Android update procedure. Technically, Treble is a modification in android architecture that communicates with hardware inside the device. The upcoming Android devices will come up with futureproof vendor implementation. Starting with Android Oreo version Google is in talks with device manufacturer regarding Project Treble. It will take time to implement it on the large basis as more than half of the devices are running an older version of Android Operating System. According to Google, Project treble ensures that upcoming Android devices will get latest updates faster than ever. After reading all this stuff about Project Treble, I am still confused about how Google is going to manage all those millions of devices.

If you check statistics of Android’s distribution then you can observe the humongous gap between latest and previous android version. Currently, 28.1 percent of phones running Android 6.x (Marshmallow), and 28.5 percent on Android 7.x (Nougat). That means nearly half of the Android phones are running on a nearly-two-year-old operating system. And most terrible statistics is that only 4.1+ percent of devices are running on latest android version i.e., Android 8.x (Oreo). In short, we can say that nearly 96 percent of Android devices are running an old version of Android.

There are two parts of the operating system code:

Why device makers like Samsung, LG, Sony are not able to give a timely update on their devices? Before rolling out the latest update, OEMs like Samsung, LG, HTC, Xiaomi, Sony needs to do major changes in code. This is likely the cause for delay in Android updates from manufacturers. With OS Framework device manufacturers also need to do modifications in low-level software. The manufacturer has to work a lot.

After all, those implementations device manufacturer can roll out the update to devices. If any OEM wants to update their device line up. Then they have to update android os code and low-level hardware code also. After updating those codes, the update can be pushed out to devices. But problem is that the low-level hardware code is generally maintained by the chip maker. So, for example, if Xiaomi wants to push an update to one of its phones. Then they have to wait for chipmakers like Qualcomm or Mediatek to release source code which will support the latest update. Here you can see that each and every manufacturer is dependent on one other. Without their support update cannot be rolled out.

With Android Oreo and beyond, Google has changed that scenario. Google has changed the framework of the Android operating system. Those improvements are codenamed as Project Treble in Android OS. It has separated the hardware code and OS code. With that separation, device manufacturers don’t have to wait for the chipmakers to update their low-level hardware code. It will remain the same. OEMs will be free to update their software. Here is the complete documentation of Treble by Google.

Hopefully, it will make a significant change in the update cycle of the Android operating system. Check if your device supports Project Treble or not. 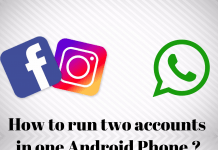 Run Multiple WhatsApp or Any App Accounts on one Phone: Android Dual Apps

How to Use Android As A Remote Control For TV, PC,...