What is Mobile VR (Virtual Reality) Technology? How to experience it?

Last year, Google released the cardboard for smartphones and Mobile VR industry took a huge leap forward. We’ve already written Fully Immersive Virtual Reality Introduction post previously. Cardboard is a platform that is being developed by google which uses your smartphone for processing the data and a DIY (Do It Yourself) kit to make a mount your phone to your head. This Kit is basically a folded cardboard box which has a magnetic trigger on the side, this design was easy to make with only problem being that you had to hold it constantly which was bit pain in the hand!

It was such a success that several companies have released accessories that you can slide your phone into, and in doing so gain a fairly inexpensive Mobile VR Experience that can be appreciated anywhere. To accomplish this level of functionality, a lot of things have to be happening in your phone all at once. Now let’s see what we need to experience the virtual reality at home.

Google cardboard is basic concept that drives a lot of the Mobile VR content, and as a result a same technology can be used for most of the VR supported applications. The accelerometer and gyroscope in your smartphone give your VR application a sense of motion and position. When you tilt your head and even spin around you can completely see more of the virtual world being generated around you. In this experience, You can’t just get up and walk around to see more of the virtual world around you or use you hand to interact in virtual world. This is where a controller come in. It helps to move around using the D-Pads and buttons to interact with the virtual environment. But, not all Mobile VR experiences are created equally when it comes to the use of this technology.

Samsung Gear VR vs Others?

For example, the Samsung’s Gear VR have its own set of an extra accelerometer, gyroscope, and magnetometer to offer a smoother VR experience. More data points in this experience means head tracking can be more precise, which leads to a more polished experience. This is Why the desktop VR experiences rely on things like fixed-point sensors for your desk and a huge array of external sensors to track movement and position. It’s a bit too much to expect that kind of experience on mobile, but it’s nice to know the experience you have with your smartphone improves dramatically with increase in public interest.

What are Mobile VR Requirements

Lets start with the basic requirement for Mobile VR.  Its a VR kit (or Headset). A VR kit is an accessory for phone where you slide your phone to experience virtual reality. There are ton of VR headset available out there. Let’s check out some of them ‘Google Cardboard’, Goggle cardboard is by far the simplest way to experience Virtual reality on almost every smartphone (subject to condition that smart phone has a gyro). All you have to do is Open the VR app and slide your phone in the cardboard box and put it against your head.

Cardboard consist of three basic components the cardboard structure, lenses and magnetic trigger. You can find all the components easily online at fairly cheap price. If you want to make one for yourself then there are also options of pre-assembled cardboard box which you can purchase at Rs. 250 (or more). Or you can opt for a plastic version of cardboard like the VR box or Zeiss. Those versions starts from Rs. 750. The plastic version have few advantages over the cardboard like adjustable lenses, sturdier build, cushioning for comfortable fit, adjustable straps and so on.

If you have a Samsung flagship from S6 or S7 line up or Note 5 then you have an extra option of gear VR. It is much expensive than the cardboard with Samsung’s proprietary software. All you have to do is plug your phone in and jump in the Virtual reality. With the Gear VR, You won’t have to constantly fiddle with a controller as it has one built right in on the side. With the phones QHD displays, the mobile VR experience can’t get any better (for now of course). Try to go for better quality display mobile.

Now that we have the headset let’s talk about the content that can experience. There are ton of apps that can give you a good VR experience, but let’s start with basic content, the 360 videos. On YouTube if you search for ‘360 videos’ you can find some great videos that would give you the feel of being in a roller-coaster or being in the cockpit of a plane or even deep sea diving as you can look all around you in these videos. These videos are filmed by a 360 camera rig which uses feeds from 6 or more cameras which is stitched together to give us a seamless 360 video. All you have to do is click the little cardboard icon before sliding your phone in the headset. You can see the VR Youtube Video Below.

Sometimes (not always) you will see a line between the images (either white or black in color). This line is to helps us to center the phone for best possible experience. The images will make more sense once you place the device in the headset, and you will find this style of setup in most apps as this setup is by far the most common form of VR right now. There are apps and games on the store that can give a very good VR experience Some of these apps let you tilt the phone to turn a vehicle, while others rely on standing up and physically panning the phone in one direction or the other to reveal more of an image or the magnetic trigger on the Side of the cardboard (like zombie shooter VR, VR silent home). But there are some that requires a controller for best VR experience (like Deep space battle VR or Galaxy VR) for those you can use any controller via OTG or Bluetooth which ever suits you.

Note: Try to load the video at maximum possible resolution for best possible experience. When you launch a VR app or Video before placing it in the headset you see that there are pair of images that are exactly identical and looks a bit weird something that looks bit like the old CRT monitors which are little bent in convex shape but don’t fill the screen and leave out some part blacked out.

The most interesting thing about mobile VR right now is how relatively young the experience is but So many companies in every part of the ecosystem are working to make this experience special, and the core of this amazing platform lives right in your pocket at all times. With every new improvement in hardware including screen resolution, motion sensing, and video rendering the mobile VR tech will continue to improve. Soon this would become a trend in personal entertainment! 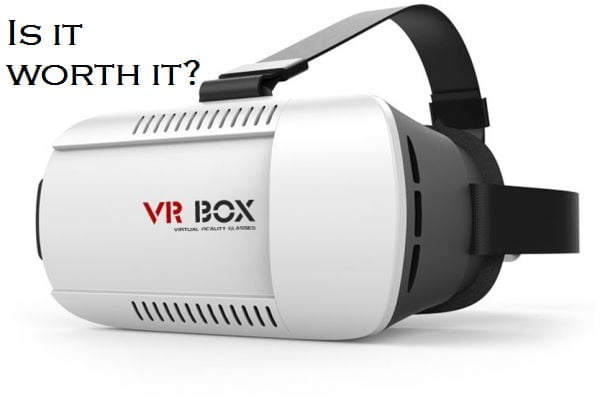 VR Box Review – one of best budget VR headset in...